I heard the sweetest little “Wahh!” … 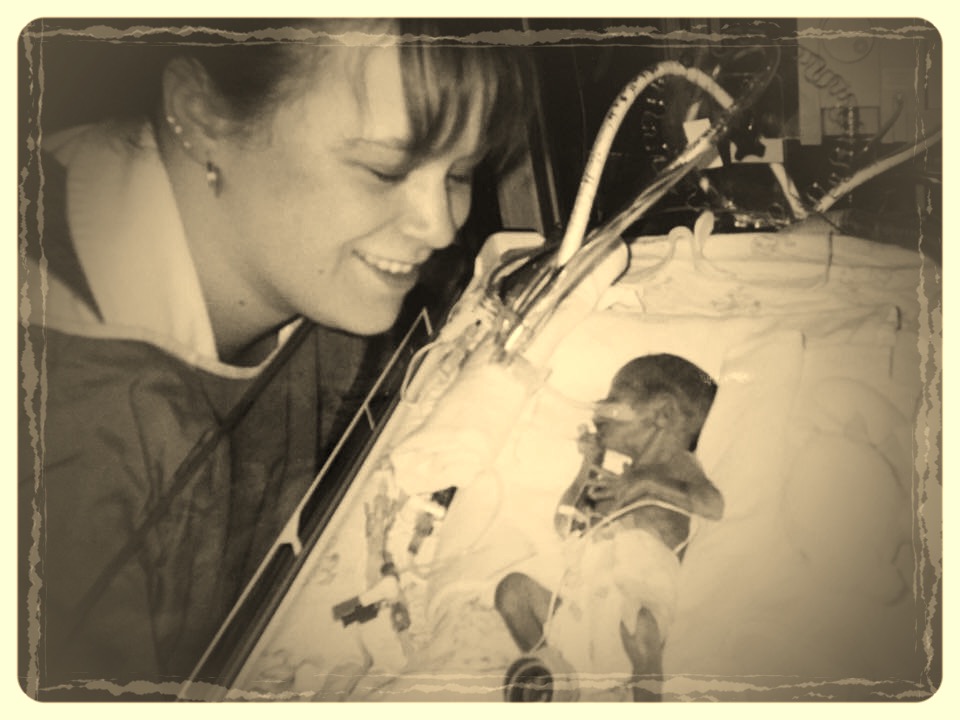 April 24, 1999 … 7:15 am … Trying to place an epidural, in a spine, on a body that has gained over twenty pounds of water weight in less than three weeks, is proving to be near impossible.  I was “stuck” in the back about five or six times, before the anesthesiologist said,

“If I can’t get it this time, we’re gonna have to put you under, and do the c-section while you sleep.”

“Ummm … there is a chance that my son won’t live … You WILL get it this time, because I want to see him alive, even if only for a minute!” (Wow! Look at me! Haven’t even met my son, and I’m already a Mama Bear!) With that, the epidural was inserted properly, and within minutes, the doctor who delivered my son, Dr. Yvonne Thornton, entered the room, and said …

“Now, please remember, that his lungs are just now developing. You will probably not hear him cry, when he is born.  This is normal.  We were only able to give you one steroid shot to help his lungs, versus the two shots, that you would normally get.  We are running out of time … for you, but I assure you (in her most sympathetic voice), even though you probably won’t hear him cry, technology has come so far …”

She continued on, but that’s all I really heard …  Technology?! WTF does technology have to do with MY SON, and his premature lungs … Actually, I remember a nurse saying that he was so early, that it wasn’t even considered premature, but rather … immature.  HA! A title he still holds dearly, to this day!!  (I joke … sorta)

That’s my boy!
Stronger than even the doctors thought!
A fighter from birth.
Strength you didn’t know you had.
YOU HAVE PURPOSE!
You got this, kiddo!
I will never leave your side … EVER!
THAT, is my promise to you.

July 30th, 2000 ~ One year “corrected” age ~ When you have a child that is born three months early, you learn a lot of new jargon that you’ve never heard before. You also become super acclimated to the NICU, and you start to believe that you could be a nurse, with all that you have learned.  Especially when your child is there for 12 weeks.  Today’s word is “corrected age”.  He’s 9 months old, 6 months, corrected age. For ONE YEAR, and three months, I had to use this term.  It was frustrating.  Unless you know, you DON’T know.  To the mom who has her babies when they’re supposed to be born, it may sound silly to you, that I complain about this … It seems minimal, in the grand scheme of life, however … it’s ANNOYING … just another way to point out that my kid is different from yours … like I said … ANNOYING, and perhaps, dare I say “judgey”?! The only positive, is that if someone overheard me saying “corrected age”, it brought on the conversation, and I was happy to talk about it.  Knowledge is power, right?!  Getting back to my point … In August of 2000, I had to bring my son for a developmental check up.  I had noticed that he was favoring one side of his body, over the other.  When he crawled, at nine months, he would over use his left side, like an army crawl, but the left side did the majority of the work.  After a three-hour evaluation, the results were in …

“Your son has a condition called Hemiparesis, which affects his right side.”

“Your son has Cerebral Palsy.”

I have an extreme love for conveying life in colorful words! Since I can remember, I have loved everything about writing, creating.. Bringing my mind to different places. Better yet ... having someone else's mind go to another place, makes me happiest!! I'm a wife, daughter, and most importantly ... Mom. I live and breathe for my family. I love to write, read, ride my bike, hang at the lake, NYC, being outside, people watching ;) My guilty pleasure is trashy, cheesey romance novels lol All in all, I'm pretty laid back... walking through this thing called life!! 🤗 View all posts by JuSteph4All

At this moment in time, my long-term vision is to one day, be a published author.  For now, I just want to write .. get my thoughts out on paper, edit, publish, repeat. I need to get back in the habit of putting my true, raw thoughts on “paper”, interacting with the community, etc. All in all, I’m happiest, when writing.  It’s been my love, my entire life.  I’m also VERY new to the “Blog-O-Sphere”, if you will :)  Please be patient as this site is still under construction.  I am hoping to  add stuff daily, as I learn more and more as I go!! Thank you for visiting.  Please click the FOLLOW ME button below! Thanks again, and ENJOY! #justeph4all